I am running VirtualBox 5.0.24 and Vagrant 1.8.5 on Digital Ocean VPS running on Ubuntu 14.04 LTS Precise I am using the box ubuntu/precise64 Everything works fine but when i do vagrant up it hangs at the

and the exit out giving time out. Now, i can consider increasing the execution time but it already takes a fare amount of time before giving that error. I don't know what I am doing wrong. Here is my VAGRANTFILE

Be sure to look at the VM terminal on VirtualBox while vagrant is hanging. For me the issue was a broken file system.

from the VirtualBox terminal and the issue was resolved.

I had this issue also and I fixed it by opening up the "Oracle Virtual Box Manager" GUI. Go to "Settings" -> "Network" and choose "Adapter 1" then expand the option by clicking on the arrow and make sure that "Cable Connected" is checked.

I was getting stuck in Windows too at the same SSH auth method: Private key (trying to SSH to an Ubuntu box), and then I get a timeout after a few minutes.

Ended up disabling the latter, restarting the OS, loading the key again in Pageant, and then vagrant ssh worked.

I came across this issue when trying use virtualisation (virtualbox + vagrant) on an AWS EC2 Ubuntu 16.04 instance. Apparently, it seems it's not possible because Amazon decided to block that option - virtualbox installation will fail / you will get the message in the title when trying 'vagrant up'. As said in this article (a bit old, but convinced me):

A more complex solution can be found here - but I didn't try it to see if it works:

HVX: Virtual infrastructure for the cloud

Found the following solution on some arcane forum, it works by adding it to the bottom of your Vagrantfile just before the line that says end:

Does the same as manually changing the setting in VirtualBox AFAIK, but I personally prefer infrastructure as code solutions. That way a colleague doesn't have to deal with the same problem somewhere down the line.

In my case, I had gotten into a sort of an invalid state. Running this command before vagrant up did the trick.

Note: Use with caution, as this will clear all data on the vagrant instance.

Well, i faced similar issue and got the resolution in the below thread: https://forums.virtualbox.org/viewtopic.php?f=6&t=97578 This was caused by me running docker desktop on windows 10, which uses windows SubsystemLinux and utilized Hyper-v to launch the Virtual env. This does not allow or makes Virtual box too slow to respond that the ssh times out and also results in File system errors. you should specially focus on the "turtle" icon which means Virtualbox too slow and i if everything is fine then you will see the "V" icon on virtualbox console. follow the instruction to stop hyper-v reboot the machine and it will work. To turn Hyper-V off completely, do this:

I had docker installed, this is why i had this issue. To solved it, i did the following:

I had this issue also and I fixed it by opening up the "Oracle Virtual Box Manager" GUI and go to "Settings" -> "Network" and choose "Adapter 1" then expand the option by clicking on the arrow and make sure that "Cable Connected" is checked.

I tried this answer and found that this was already enabled by default. I Tried disabling and re-enabling and this first gave me the following message Warning: Connection aborted. Retrying... after which vagrant continued the startup and did so successfully

Comments:
2023-01-07 20:30:18
Welcome to SO Rick. Please notice that your post is not really an answer to the question. Once you have sufficient reputation, if you have a contribution that can improve an existing answer, please comment on it instead of answering again.

Seems like the latest versions are not working on a VPS. I had to choose the older versions of the softwares to run them on this ubuntu VPS The versions i chose was

This works but you will have to configure ssh

Following the advice from user Kokokoko above I added the following lines to my vagrnt file.

installed the latest virtualbox, made sure the vm was halted properly and it worked for me.

After spending weeks reading and testing all the answers I found, even the answers that were not marked as correct, I don't remember where, someone mentioned something about Guest Additions... I found the plugin and installed it: 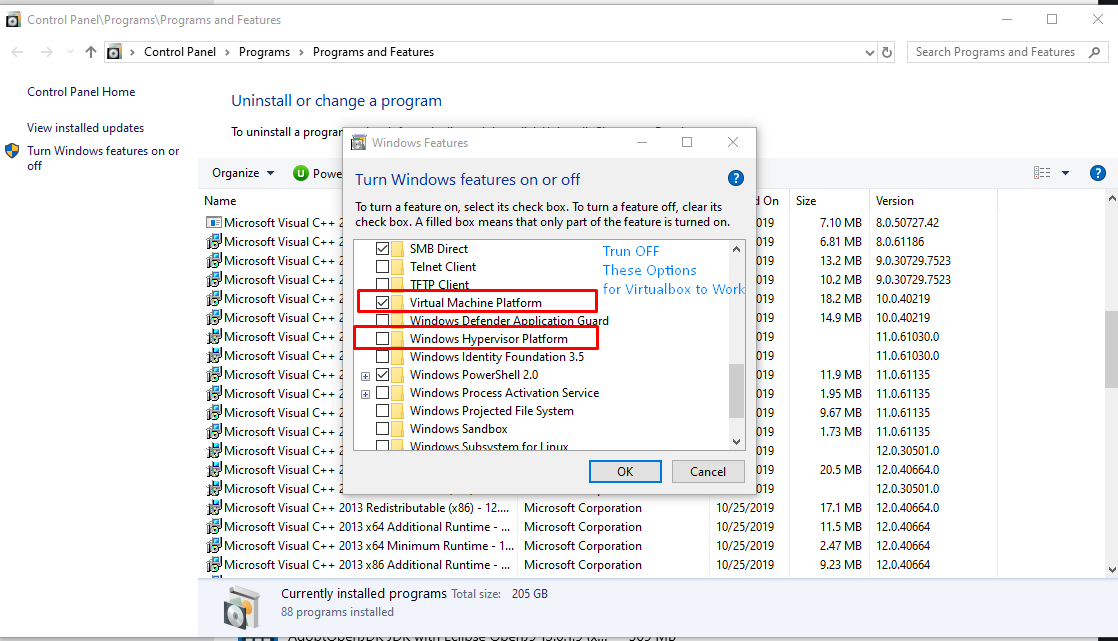 but it didn't helped me so i went through Windows features and found that Virtual Machine Platform was turned ON so i look it up and it was linked to WSL so i turned it OFF and my ssh key problem solved.

UPDATE AS OF MAY 2021: So I found that this was an actual bug in Vagrant. The solution comes directly from Hashicorps' GitHub.

Basically open the vagrantfile and add these lines under config.vm.provider :virtualbox do |v| and before end:

If the line is config.vm.provider :virtualbox do |vb| then the code will be:

Let's first understand some basic DHCP concepts. If you open up Virtual Box and go to File > Host Network Manager OR type Ctrl + H you will see the following window. 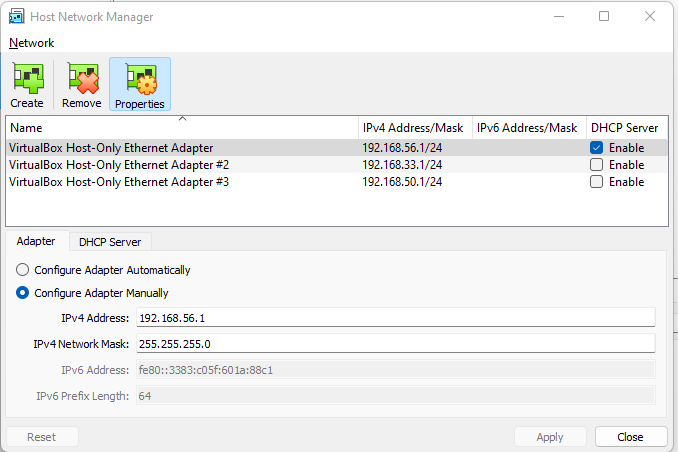 What you need to understand is that a DHCP server simple allocates IPs to new virtual machines in this context.

Click on the DCHP Server tab to see the range of available IP addresses. 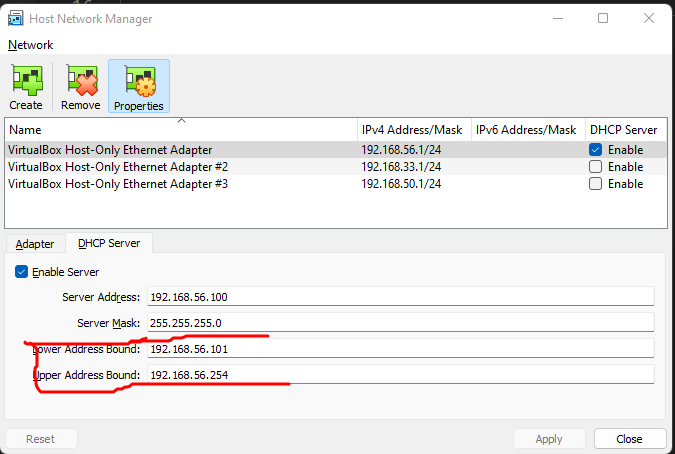 So in our Vagrant file we can do, I picked an arbitrary box:

If you want to see the progress of your VM, click on Show

Once that is done, you can ping both of your machines from your host command line:

As you can see, oddly enough the first pings timed out but after that they start reaching the VM. For this, I don't have an explanation but it works afterwards.

The virtualbox__intnet: false option basically tells Vagrant to allow connectivity from the host to the VMs. Otherwise, the VMs would only be able to communicate between each other but not the outside world. Here's the doc reference for that

Having recently run into this problem myself, I concluded that installing Docker Destkop for Windows caused a series of changes to my system that essentially broke VirtualBox with Vagrant.

I have concluded the following steps as my minimum viable resolution:

I will need to restore each feature one at a time to see how far I can go before breaking this again.

Here's a screenshot of the various tidbits, and the pointers:

I now also note that Enable Nested VT-x is no longer greyed out on my CPU settings menu in VirtualBox. 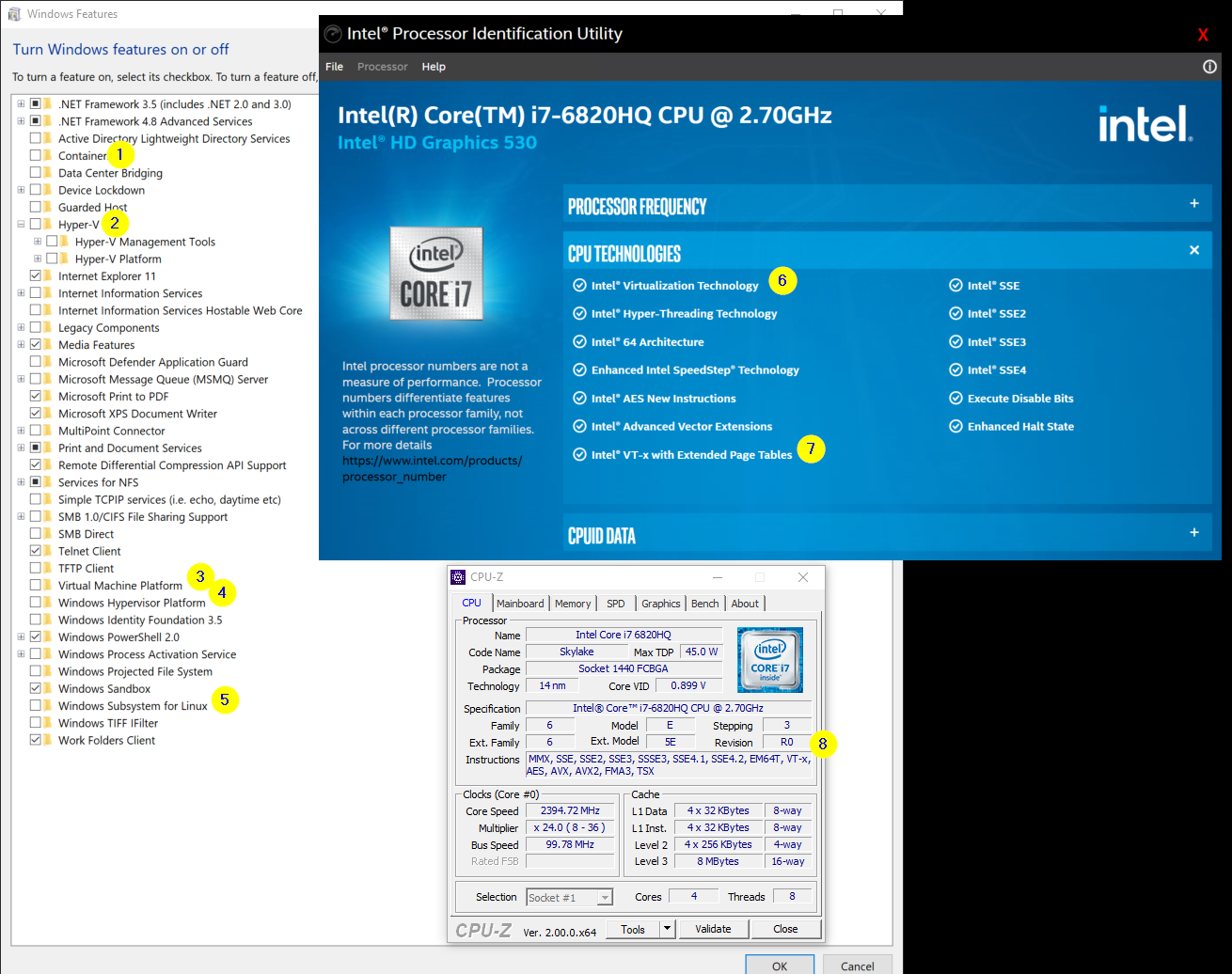